Skip to content
Posted on August 6, 2018 by Hemley Gonzalez

According to a member of the NCPCR, a two-member team visited Nirmal Hriday, a home for unwed mothers by the Missionaries of Charity last week and found that illegal adoption activities had been going on there for the last several years and ‘efforts to probe them were thwarted’ in 2014 when a member of the child welfare committee tried to conduct an inspection.

While the police has already traced four children who were sold by the home for adoption, 58 other cases are under investigation based on an FIR filed by the state child welfare committee on June 5. The Commission has now written to the state government and the director general of police to also investigate details of adoptions conducted by the trust over the last five years.

The NCPCR will also submit its report to the Union Women and Child Development Ministry. The ministry has already directed all states to inspect child care institutions run by the Missionaries of Charity. 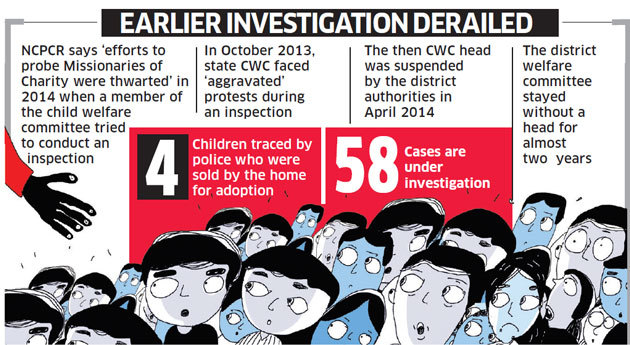 As per the probe carried out by the NCPCR team, the state child welfare committee had received complaints about illegal adoptions being carried out by the trust in October 2013 but the district CWC team that reached the home to conduct an inspection in February 2014 faced ‘aggravated’ protests.

The then CWC head, Om Prakash Singh, was later suspended by the district authorities in April 2014.

According to Ranchi Child Welfare Committee head Rupa Verma, appointed in June this year, there was no one heading the welfare committee for almost two years.

It was Verma’s FIR filed with the police on July 5 that led to the arrest of a woman staffer for allegedly selling a child born to a minor inmate of the home, to a couple.

In her complaint, Verma said that a couple from Uttar Pradesh’s Shone Bhadra district had approached the CWC after the shelter home allegedly took away the child they had earlier given them on May 14.
Source: http://bit.ly/2OJTCvz